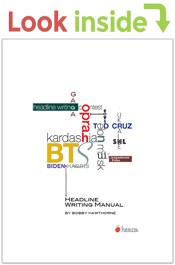 Award-winning journalist and former UIL Journalism contest director Bobby Hawthorne has headline writing down to a science. In this manual, he explores the fundamentals of headline writing, tips and strategies for tackling 1-, 2- and 3-line headlines, the criteria UIL judges expect contestants to meet and much more. This product is perfect for students preparing to compete in the UIL Headline Writing contest and journalism classes.

Looking for a Bulk Discount? Select "Team Set of 5" from the menu and get the set for only $275 or contact our office to purchase 5 or more copies for only $55 each!

Seeking additional study materials? Add The Radical Write and Game On: Reporting and Writing Sports for High School Media to your order!