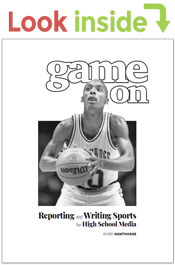 Game On: Reporting and Writing Sports for High School Media

This major revision of Bobby Hawthorne's text covers the entire spectrum of high school sports coverage, writing, and photography. Packed with excellent writing and photo examples, the book is a perfect complement to Hawthorne's The Radical Write.

Ordering for a school or team? Select "Team Set of 5" from the menu and get the set for only $105 or contact our office to purchase 5 or more copies for only $21 each!

Seeking additional study materials? Add The Radical Write and Copy That: Writing for Yearbooks/A Beginner's Handbook to your order!