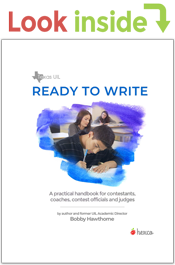 Ready to Write by former UIL Academic Director, Bobby Hawthorne, is a no-nonsense handbook for serious UIL Ready Writing high school contestants and coaches! Packed with sound advice and useful tips, Ready to Write shows how a professional writer approaches and digests a high school Ready Writing prompt and organizes notes to develop the 1st, 2nd, and final drafts. Gain a clear picture of what constitutes good and bad writing in the eyes of most judges through practical (and occasionally humorous!) writing samples and commentary. Hawthorne illustrates how he edits his own writing and addresses the use of jargon, slang, clichés, redundancy, verb and noun agreement, and even how to be yourself when writing. Get this insiders look at how to produce a winning essay and a compelling piece that can earn the respect and votes of the judges!

LOOKING FOR A BULK DISCOUNT? GET 5 or MORE for ONLY $55 each!

About our Journalism Author