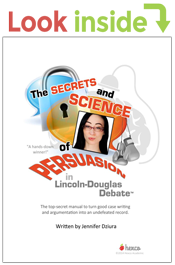 The Secrets and Science of Persuasion for UIL/TAPPS Speech & Debate

What's the secret behind how some debaters seem to win every round, even though their arguments aren't that different from everyone else's? What does neuroscience show about why people (i.e., judges) change their minds? What do you do when your opponent seems intimidatingly perfect? Ideal for debaters who already know the basics of, and have 1-2 years experience in value debating. This is the "top-secret" manual to turn good UIL debate case writing and argumentation into an undefeated record.

A recommended study guide for anyone studying for the UIL, Lincoln Douglas Debate (LD) and other speech and debate competitions including TAPPS Debate tournaments.

LOOKING FOR A BULK DISCOUNT? GET 5 or MORE for ONLY $55 each! 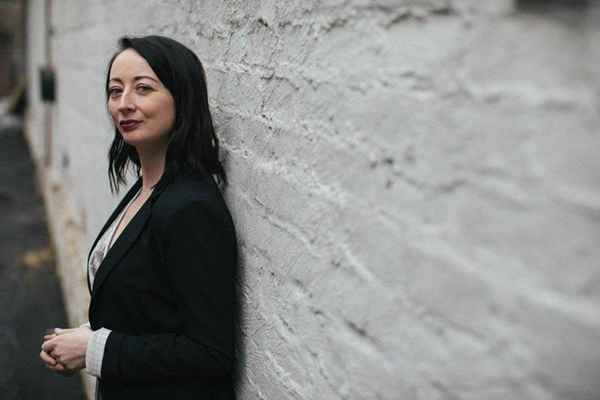 Jennifer Dziura was the 1995 and 1996 Lincoln-Douglas champion of Virginia, represented her district in the NHL Nationals in both Lincoln-Douglas and foreign extemporaneous speaking, and went on to captain the Parliamentary Debate Team at Dartmouth   College. She has judged Lincoln-Douglas, C-X, and parliamentary debate, and is the author of a booklet entitled "Dewar's Guide to Debating" for Dewar's Scotch. She is also author or co-author of over a dozen educational books, has entertained the troops in the Middle East as a standup comedian, and has appeared as a "genius" in television pilots for SyFy and National Geographic. She runs an adult spelling bee in Brooklyn, NY, and has spoken at Harvard, Yale, and other universities about designing your own career, networking, and forging your own path to success.