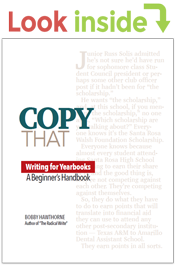 Copy That: Writing for Yearbooks/A Beginner's Handbook is a step-by-step approach explaining how to find stories hidden in plain sight, conduct an interview and write leads as well as how to organize a story, edit it efficiently and end it gracefully. This text is full of student story examples and is accompanied by writing tips in a special reference section! It is a usable, practical and readable primer for beginning yearbook advisers and staff writers that will inspire students to produce eye-catching yearbooks which will be a joy to read for years to come.

Author Bobby Hawthorne states, "This isn't magic nor mystery nor theoretical mathematics. It's a step-by-step process that requires nothing more than an open mind and an open eye. TRUST ME, YOU CAN DO THIS!"

One adviser who reviewed the book said, "You have a TON of great, useful information for students and advisers on how to truly 'do' journalism - from interviewing tips to guiding students through every aspect of writing a story. I really love this resource."

Ordering for a school or team? Purchase five books or more for only $17 each!
Seeking additional materials? Add The Radical Write and Game On: Reporting and Writing Sports for High School Media to your order!