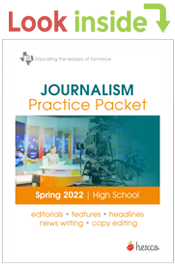 Packets published before 2019 do not include Copy Editing because the contest was still in its pilot stage with UIL at that time, and the price is lower for that reason. If you are interested in additional Copy Editing exams, we published Copy Editing Practice Packets from spring 2016 through fall 2018 which are available here.

In addition, some older Journalism Practice Packets are available for half-price. Please contact our office at (830) 367-3825 for availability!

Susan Duncan, MJE, is a retired journalism teacher who currently does freelance writing and design. Duncan began writing for her hometown newspaper as soon as she graduated high school and has been writing ever since. She advised 29 yearbooks and 15 years of newspapers, both in print and online. She is a past president of the Texas Association of Journalism Educators, who recognized her with their Texas Treasure award in 2019. She is also a UIL Edith Fox King Award recipient and a UIL Sponsor Excellence Award recipient.

Rhonda Moore is a retired journalism teacher who taught for 30 years, most recently at McCallum High School in Austin, and penned a number of our journalism and copy editing practice packets written before 2020. She is the 2004 Max R. Haddick Teacher of the Year and is an Edith Fox King Award recipient. Her students' publications have won the National Scholastic Press Association's Pacemaker Award, Columbia Scholastic Press Association's Silver Crown and the Interscholastic League Press Conference's Gold, Silver and Bronze Stars. She is the former executive director of the Texas Association of Journalism. In 2008, Rhonda was a CSPA Gold Key recipient.