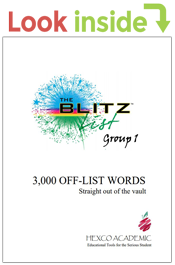 88% of finalists at the 2019 National Spelling Bee used the Blitz List!

A Finalist and semifinalist favorite, the Blitz List is sure to challenge you with some of the most difficult words in the dictionary! Over the last decade, a fair percentage of words seen at the National Spelling Bee had not been on any published study list, and a large number of these words have even escaped many advanced spellers - until now. Collectively, "off-list" words or "words from nowhere," have reached as high as 35-45% of all words given at the National Spelling Bee, and Hexco was the first to recognize the growing need to record and identify very difficult words that had never been used at the National Level. Since our first volume, which was released in 2011, some of these words have been seen at the National level, and we have since released Volumes 2 and 3, and Volume 4 is now available on our eMentor platform! Each volume contains 3,000 words!

*Applies to the date of publication per volume; some words have since appeared in bees after the publication of each volume.

The uniqueness of words selected for Blitz List combined with the difficulty level of words chosen for these volumes makes Blitz List a favorite of top-level spellers who have already mastered New Nat's Notes and Verbomania. Watch this video to see where this product ranks on level of difficulty compared to other products. We also have this list in our eMentor format to help you practice these words from your computer until you perfect them!

History of Blitz List and the National Spelling Bee

Looking for this product with audio pronunciations? Audio can be helpful in learning difficult words such as these. CLICK HERE to learn about Blitz List eMentor!

WHERE DID YOU FIND THE WORDS?
Having worked with spellers in the National arena for over 30 years, we’ve collected words from a large number of sources, including our "Weird Word of the Week," various specialized lists that were swapped and traded with spellers over the years, and obtuse words that we’ve ferreted out of Webster’s Third.  Recently, we’ve started editing these words, adding phonetic pronunciations and definitions and putting them in a format for publication.

IS BLITZ LIST RIGHT FOR ME?
For those students who have conquered Verbomania and New Nat’s Notes, this is the obvious next step in expanding your spelling foundation. Still, around 60+% of all Regional and National Bee words are from Verbomania and New Nat’s, but recent years have shown that 30+% are from nowhere, and this is what we have ferreted out of the dictionary and provided as a study list.  Read a summary on all of our products that contain word lists here.

Note: This product is not returnable.

KEY Regional/National Words (not in any Hexco published lists)