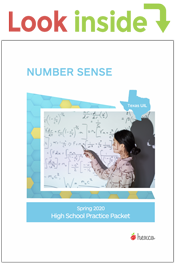 UIL Number Sense Practice Packets, written in the same format as the UIL Number Sense contest, help students and gain the winning 'edge.' We recommend using our time-tested collection of Practice Packets from 2012 to the current year which were written by current UIL Number Sense State Director, Larry White. Since these tests are written by the contest director, coaches and parents will gain better insight into how a student might perform on an actual UIL test and more accurately identify a student's strengths and weaknesses.

Can you explain the difference between fall and spring Practice Packets?
Hexco's Number Sense Practice Packets are books of Number Sense practice tests which were used as the previous season's invitationals. For example, each spring and fall we sell real invitational tests written by Larry White. These invitational tests are confidential until the selected test day. However, instead of throwing these away at the end of each semester, we repurpose them so you can get more practice! This is why the drop-down says 'spring' is shipping in fall and that fall packets ship in 'spring.' In summary, simply remember that Practice Packets from Hexco, which are labeled fall or spring, are actually sets of tests from the previous season!