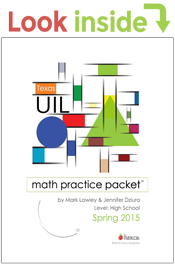 Hexco Practice Packets have been used for years by students and coaches who are aiming to place in the top rungs of UIL Academics. Get real practice for the UIL and TAPPS Mathematics competition with tests that have been used in actual invitational meets.

Mark Lawley holds a BA from Dartmouth College and two masters degrees from New York University, where he serves as an adjunct lecturer. He is a guest lecturer at Stony Brook and an adjunct professor at the College of Mount Saint Vincent. Mark periodically retakes the SAT to ensure he still scores in the 99+ percentile and now enjoys making an impact on students' test scores. He takes pride in demystifying algebra, geometry and the SAT for his students. Other accolades include - AP Scholar with Distinction, high school salutatorian, recipient of the NCTE writing award, state-level piano performance awards, and more.

Jennifer Dziura was the 1995 and 1996 Lincoln-Douglas champion of Virginia, represented her district in the NHL Nationals in both Lincoln-Douglas and foreign extemporaneous speaking, and went on to captain the Parliamentary Debate Team at Dartmouth College. She has judged Lincoln-Douglas, C-X, and parliamentary debate, and is the author of a booklet entitled "Dewar's Guide to Debating" for Dewar's Scotch and is the author of Hexco's Secrets and Science of Persuasion. She is also author or co-author of over a dozen educational books, has entertained the troops in the Middle East as a standup comedian, and has appeared as a "genius" in television pilots for SyFy and National Geographic. She runs an adult spelling bee in Brooklyn, NY, and has spoken at Harvard, Yale, and other universities about designing your own career, networking, and forging your own path to success.