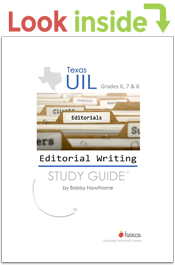 Buy UIL Editorial Writing Study Guide for Grades 6-8 and learn tips for improving students' performance in the contest! Bobby Hawthorne, author of the original UIL Journalism Contest Manual and former UIL contest director and is now bringing his expertise to the A+ Editorial Contest for middle school/junior high grades 6-8. Hawthorne is an expert on writing persuasively with precision, clarity and vigor. The skills learned in this manual encompass and transcend the 'ordinary' and provide the foundation for powerful speeches and presentations, college application letters and even business proposals. Accuracy, balance and integrity are emphasized throughout. Written for grades 6, 7, and 8 -- this book is a must-have manual for the UIL A+ Editorials contest.