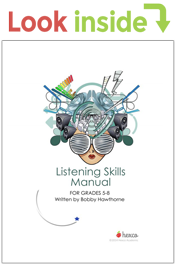 Effective Teaching Tool for the Classroom

Listening Skills Manual by Bobby Hawthorne is designed to help students in grades 5-8 recognize the importance of active listening.

This product is not only valuable for students and coaches in the UIL Listening contest, it is an effective teaching tool for the classroom in general and for other contests that require verbal comprehension through listening such as Storytelling, Spelling, and High School debate (UIL or general).

BONUS: Two additional full sample tests with scripts, questions and an audio USB with a reading of the script! Stories are titled, The History of the Crayola Crayon and From Wolf to Woof-Woof: How dogs became man's best friend.

Bobby Hawthorne is the former UIL Academic Director and author of the publication, "The University Interscholastic League: An Illustrated History of 100 Years of Service and Longhorn Football." He has also served as Journalism Director and Current Issues and Events Director of UIL and is author of Hexco's "CI&E Notes," "Journalism Invitational Tests," and "Power Journalism." Hawthorne is also the author of the popular journalism textbook, "The Radical Write."

Hawthorne has received a number of awards, including the Columbia Scholastic Press Association’s Charles R. O’Malley Award for Excellence in Teaching and their Gold Key and James Paschal awards, the National Scholastic Press Association’s Pioneer Award, the Journalism Education Association’s Medal of Merit, and the Interscholastic League Press Conference’s Edith Fox King Award, given for distinguished service to Texas scholastic journalism. Named a lifetime member in 1991 by the Texas Association of Journalism Educators, Hawthorne also received their Trailblazer Award.